Located in western Nevada where the southern part of the Walker Lane structure, a major northwest-southeast-trending structural zone that hosts a variety of precious metal and base metal mineral deposits,

Recently collected high-grade samples include 11.21% and 4.24% copper in the area where the sample of 10 g/t gold had previously been collected (2008) 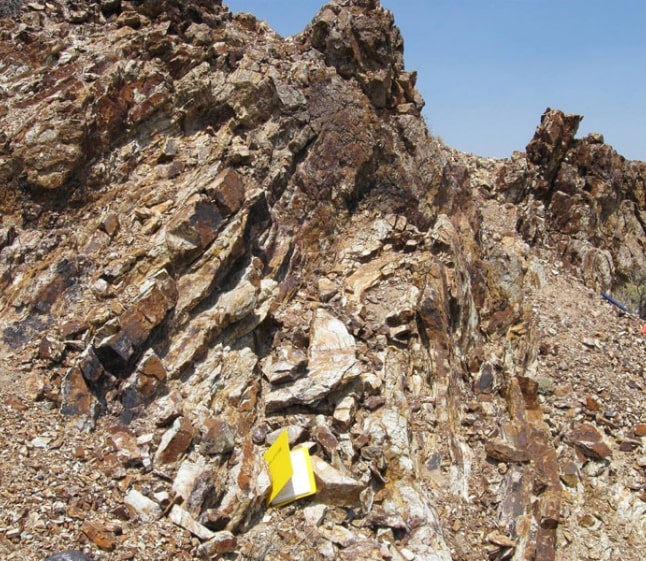 The South Lida Project is a gold exploration property being explored for sediment hosted, Carlin-type, structurally controlled epithermal-type gold potential. The project is located in western Nevada in an area where the southern part of the Walker Lane structural merges with the Owens Valley and Furnace Creek faults.

The Walker Lane is a major northwest-southeast-trending fault zone that hosts a variety of precious metal and base metal mineral deposits (as well as geothermal activity).

There are two types of deposits being explored for:

Fault controlled epithermal-type deposits are found throughout Nevada and typically are associated with complex fault settings along high-angle faults. The association of low-angle faults often provides additional areas where further discoveries can occur.
No mineral reserves or mineral resources are defined on the South Lida Project; however, through modern technology and with the right team, this geologic setting could show favorable results as it has for gold deposits in the Great Basin region of Nevada. 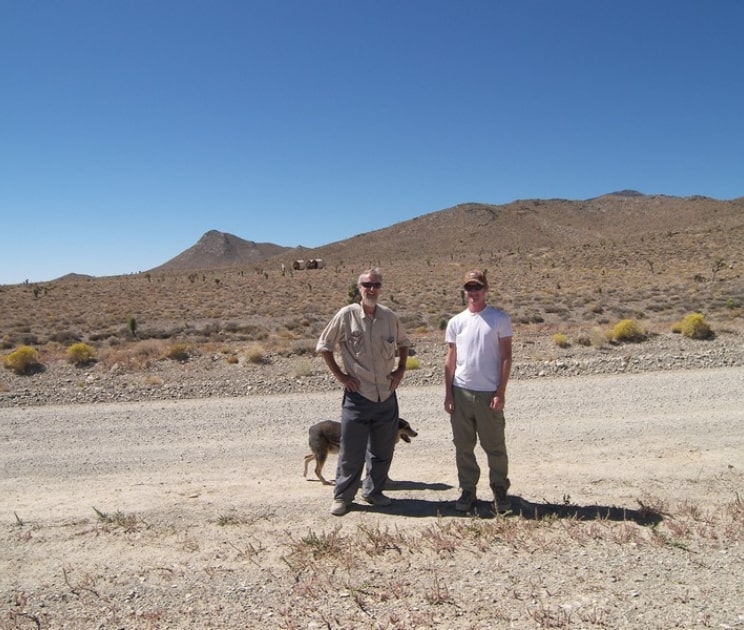 The geologic setting of the South Lida Project includes a Proterozoic to Paleozoic age sequence of shale, siltstone, sandstone, limestone, dolomite and quartzite which is intruded by a series of Jurassic to Tertiary age intrusives and dikes that range from granite to diorite in composition. Tertiary age sedimentary, volcanic, and volcaniclastic rocks form pediment surfaces and fill Miocene and Pliocene topography.

The mountains comprising the area are arcuate shaped and generally are convex to the south. Two primary structural frameworks are indicated in the geology of the surrounding Magruder and Palmetto Mountains. North of Nevada State Highway 266 the tectono-stratigraphic fabric is probably a part of the Antler Orogenic belt with thrusts and low angle faults emplacing Ordovician age rocks in fault contact with Proterozoic and Cambrian age rocks. South of the Palmetto Mountains at Magruder Mountain and the hills to the south the structural fabric is characterized by steeply dipping faults and open folds.

The South Lida Project sediments generally strike northeast and dip northwest and are intruded by numerous dikes. The historic prospects and surface workings at the South Lida Project primarily explored for gold and silver in the sedimentary and intrusive rocks. The rock is sometimes silicified and/or veined with open space textured quartz veins. Most typically, the goldbearing samples contain moderate to strong iron-oxide and sometimes they can also show copper staining. Argillization is common in a few of the gold-bearing samples.

The soil geochemical anomalies appear to extend beyond the limits of the mapped, outcropping units suggesting a shallow colluvial cover and leakage along concealed faults. The data indicates that good potential could exist to discover a near surface, structurally controlled, high-grade gold deposit or potentially a large tonnage, open pittable gold deposit. 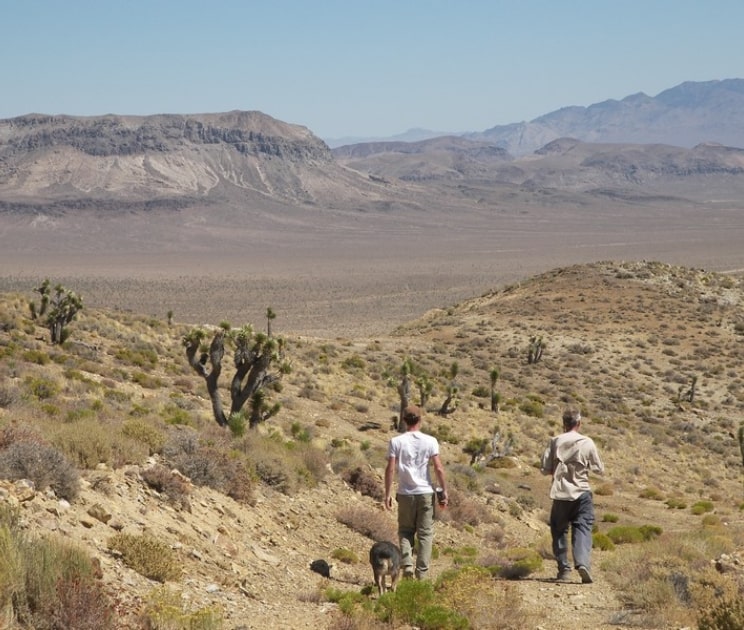 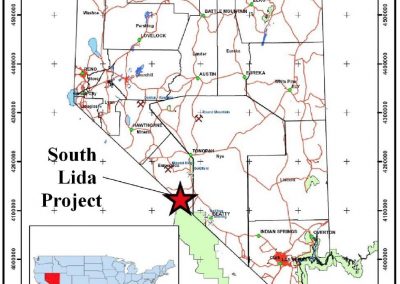 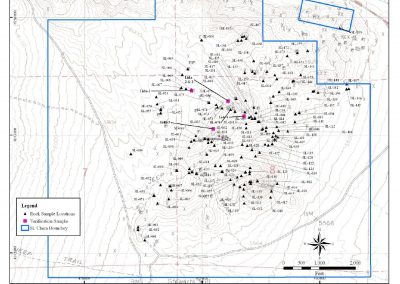 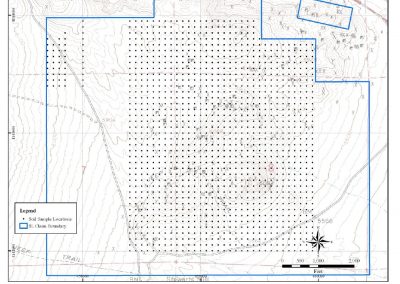 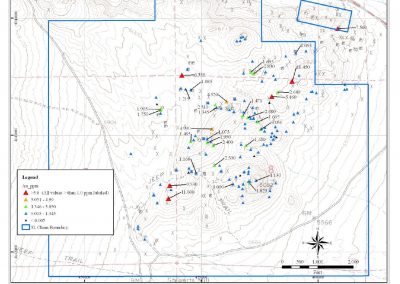 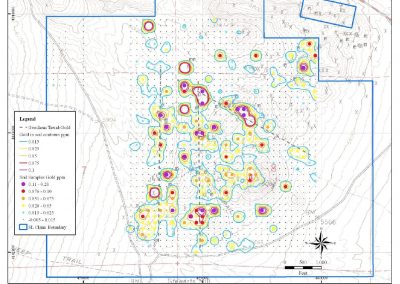 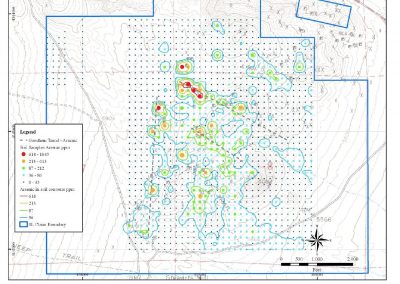 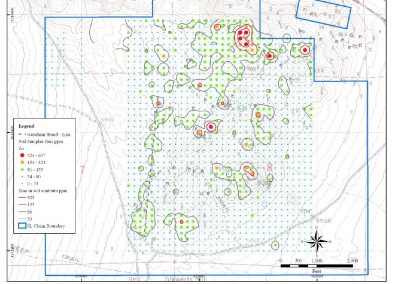 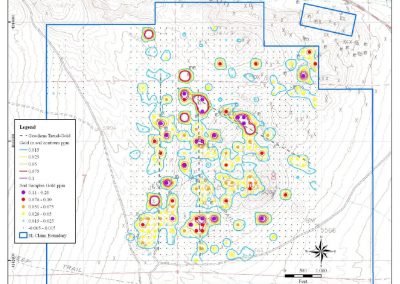